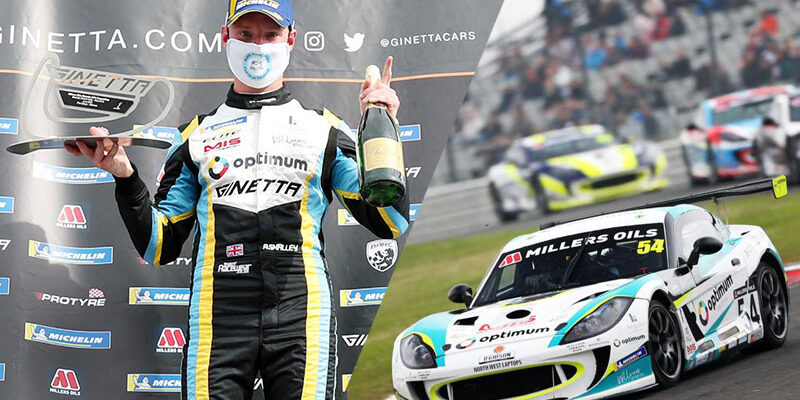 Adam Smalley had an excellent weekend at Brands Hatch for round two of the Ginetta GT4 Supercup Championship. Taking another race win, a podium finish and gaining the championship lead.

Starting strong Smalley put in the third fastest time in qualifying securing him a strong start to the first race. Starting in position three on the grid, he pushed off the line into 2nd place before the first corner. Smalley initially lost ground on the safety car restart but with 8 laps remaining he hunted down the leader and crossed the line in 2nd place to take his third podium of the season in four races.

The second race of the weekend was held on Saturday 26th June. Smalley lined up in second place on the grid and immediately challenged for the race lead heading into turn one. It was neck and neck until he made a bold move taking the outside of corner one putting Smalley in the lead. With another 24 laps to go Smalley got his head down and pushed to maintain his position, taking the victory. This made his third win out of 5 races and a jump into the championship lead despite a DNF in round one at Snetterton two week prior.

The final race of the weekend took place on Sunday 27th June. Smalley lined up 5th for the reverse grid race after drawing number 5 out of the hat. He started the race in 5th place and finished in 5th place despite having more worn tyres than his competitors.

It was a great weekend for Smalley ending round two with another victory as well as taking the championship lead. The Ginetta GT4 Supercup heads into a 5-week break, before returning to action on the 31st July at Oulton Park for round three of the championship.

Nantwich Food Festival a success for The Boulton Group!
September 5, 2022

Optimum Pay Group shortlisted for the Best Umbrella Company at the 2022 Contracting Awards
May 25, 2022